The afternoon of Friday, 7th July 2017 was an excellent afternoon for many of us. We started with a delicious First Friday lunch in the Village Hall at 12.30pm. Thank you to Liz Watson and Judith O’Quinn and all your helpers. Some of the helpers managed to clear up in record time, so that we could all assemble at King’s Close at 2.30pm and meet Helen and Jeremy Humphreys. They welcomed us to their beautiful Arts and Crafts house, designed by Mackay Hugh Baillie-Scott in 1907. They have been working hard to restore many of the Arts and Crafts features since buying the property about 3 years ago. 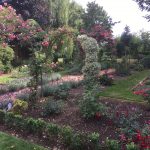 One of the key principles in Baillie-Scott’s design was that the garden should be linked to the house – serving as an extra room – so vistas from the house to the garden were very important. Helen and Jeremy have restored the brick path that leads from the front gate to the gravel area in front of the front door. The brick path continues at the back of the house and leads the eye to the orchard at the bottom of the garden.

At the front, borders, edged with box in the shape of the Union Jack, have been restored, and the yew by the front gate has been cut back so the gate can be opened. There is a lovely walk along the brick path, past the box hedges with seasonal planting, to the front door. A beautiful climbing rose sets off the front of the house and the Tudor style beams and front door.

Before going to the back garden, Helen and Jeremy very kindly let us look at their living room which still has the original twentieth century paneling. Helen showed us the settle by the window that was designed by Baillie-Scott and the wooden doors with the original door furniture that can be used to divide the room from the rest of the house.

Seeing the room also gave a vista of the back garden. Jeremy and Helen have worked very hard in this area, reinstating the brick path down the middle and removing ivy and conifers. The pink roses climbing over the original metal arches looked stunning as the main feature leading the eye down the garden. Helen and Jeremy have been busy planting the borders that edge the path with lavender and lilies, which were coming into flower and attracting the bees.

The final room at the bottom of the garden was the orchard and meadow area. The trees were already laden with fruit. On a hot summer day, it was a lovely place to rest and admire the views to the house. We were indeed in another beautiful room.

Thank you once again Helen and Jeremy for your kindness in allowing us to come and see your lovely garden. We now have a better appreciation of what the Arts and Crafts architects were seeking to achieve and wish Helen and Jeremy every success in what they describe as their ‘work in progress’.

The next meeting of the Society is on Monday 20th November, 2017 at 8pm in the Church Barn when Steven Cockings, the Chairman of the Bedford Roman Villa Project will talk about the Roman Villa complex at Manton Lane, which may well have been linked to evidence of Roman settlement in Biddenham. I hope you will be able to come.